Where to shop on Sunday?

In addition to traditional forms of recreation, many of us make purchases while traveling. Short weekend trips are an ideal opportunity to visit foreign stores and above all, bring a souvenir, eg a new T-shirt. The European Consumer Centers (ECC-Net) have summarized where in the EU you can shop on Sundays.

The ECC-Net covering the EU, Norway and Iceland countries answered the question: Is there a legal prohibition of trading on Sundays (besides public holidays)? 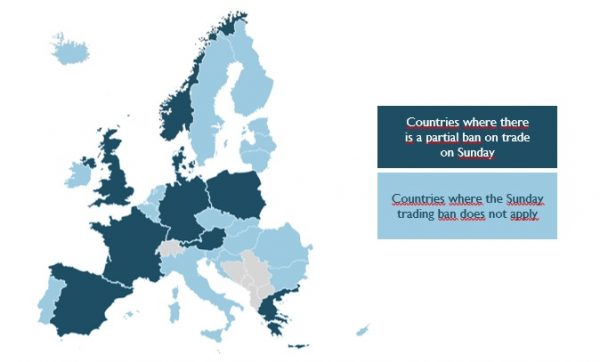 Belgium: there is no ban on Sunday trading but there is an obligation to close the store one day a week.

Portugal: no ban, municipalities can regulate the opening hours of stores and limit them to specific hours in specific districts. Most municipalities, however, allow to open stores on Sundays.

Slovenia: there is no obligation to close shops, however, there is a stipulation in the labor law that a given employee can work up to two Sundays a month (no more than 15 Sundays/year).

Only on selected Sundays / hours:

France: the municipal council establishes twelve Sundays a year in which stores can be opened. The list must be set by December 31 of the previous year, the date may be changed two months before the first opening.

Spain: the ban does not apply to certain Sundays. The stores, however, are to be closed for a minimum of 10 to 16 Sundays a year (this is determined by the municipalities – autonomous communities).

Poland: In 2018, (since March) shops are to be opened on first and last Sundays of the month

In 2019, shops are to be opened on last Sundays of the month, from 2020 almost every Sundays

Selected categories of stores / products exempted from the ban:

In most countries pharmacies (at least on-duty) and shops at petrol stations, railway stations, airports are normally open.

France: shops without staff, bakeries, pastry shops, all grocery stores can be open until I p.m..

Norway: grocery stores and kiosks with an area up to 100 m2, tourist shops or small local shops.

Great Britain: agricultural stores that sell their own products (including fish sellers); small shops with an area up to 280 m2.

Differences depending on the region:

Austria: there are exceptions regarding places of pilgrimage, tourist regions, eg Vienna: gifts and sweets can be sold without restrictions; florists can be opened on six Sundays or public holidays a year (until 5 p.m.).

Greece: the authorities in the region may decide to open the stores in the tourist regions.

Germany: there are many exceptions to the ban, they are regulated by the region.

Malta: shops can be opened in tourist destinations.